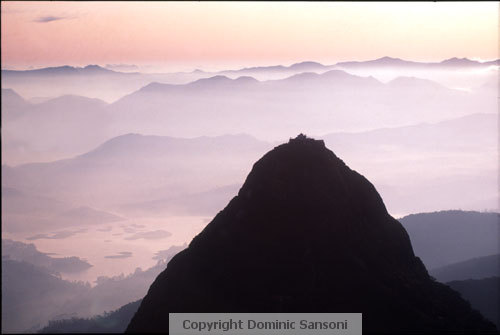 When they reach the peak they crowd inside the enclosure and upon the steps outside, facing the east with their hands held together in an attitude of adoration awaiting the emergence of the sun. They watch intently the changing colours or the sky prior to sunrise and just as the tip of the sun appears, the pilgrims cry out uproariously, "Sadhu, sadhu, sa!" bending their heads in worship, while a heavy bell is loudly rung. This is of course reminiscent of sun worship.

Shortly after this, the Brahmin priest brings boiled rice from a group of buildings beneath the steps. As he passes the pilgrims touch the covering of the bowl in which the rice is carried. Thus everyone participates in the ritual act that is to follow. The priest approaches the rock and places the food upon it as an offering. This points to a time when food was offered to the sun god. Many Hindu pilgrims carry heavy loads of food for the use of the temple while often large quantities of rice are carried on the head of a pilgrim. These gifts of food are handed over to the officiating priest.