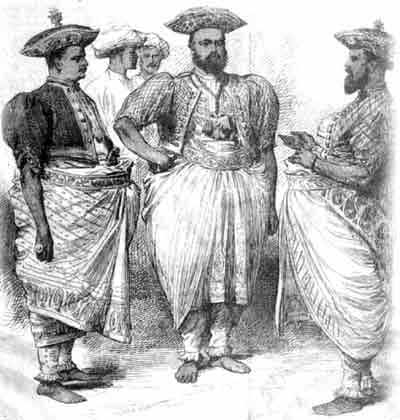 Sri Lanka's world famous Holy Mountain is once again the attraction, where devotees from all parts of the country engage in the annual pilgrimage. Their voices echo and re-echo from their innermost hearts in the cold clammy atmosphere with resounding voices shouting "Karunawai" as they ascend or descend. In the crisp air and sunshine hordes of butterflies swarm the historic mountain as it were in company with the pilgrims.

Yellow and white butterflies and jewel coloured varieties merge with the greenery of the Sacred Peak as they too pay homage to the Sacred Foot Print.

The word Samanala Kanda may have been given to this mountain mainly because of this phenomenon. This mountain has gained so much publicity due to its sanctity believed by all four main religion adherents namely, Buddhists, Hindus, Christians and Islamists. The undisputed fact is that whatever religion each pilgrim belonged to, the religious devotional fervour of all of them are identical and lasting. However while beliefs of some depend on mere faith, the claim of the Buddhists alone refer to recorded history and partly legend.

When considering the mountain's history it lends a certain feeling of a supernatural aura brooding a hidden divine power. On the 8th year after Enlightenment Lord Buddha visited Kelaniya at the request of the Naga King Maniakkika. On this occasion it is said that Buddha was accompanied by 500 monks. After His sojourn at Kelaniya Buddha visited three other places, namely, Digavāpi, Kataragama and the beautiful mountain in the Central Hill Country 7,360 feet high. Here the Buddha left the trace of His left foot at the summit on a gemstone, on the request of God Saman, the guardian of the Peak.

Buddhists believe that the real Foot Print is below the now visible rock impression which is not proportional to that of a human being. Buddhist devotees who climb the Peak regard God Saman as their benevolent protector. Buddhism was introduced to Sri Lanka during the reign of King Devanam Piyatissa (247-207 B.C). He was the grandson of King Pandukabhaya (437-307 B.C), the pre-Buddhist founder of Anuradhapura, capital of Lanka, which lasted for 1500 years up to the middle of the 18th century AD.

It is believed that the first person to discover the Sacred Foot Print was King Valagambahu about the year 100 B.C., while he was in exile in the mountain wilderness, better known to our people as "Sri Pada Adaviya", to escape the marauding Cholians. He had been led to the summit of the mountain by a deity in the guise of a stag. Thereafter not only ordinary pilgrims but Royalty with their court retinue paid homage to the Foot Print of the Buddha from ancient times. The Sinhalese kings alone, in their devotion and persistence made the Peak accessible to the crowds of devotees who annually trekked the mountain.

The thousands of pilgrims who make their annual pilgrimage to Sri Pada today perhaps do not realise the difficulties their ancestors had to undergo in order to pay their need of homage at the Sacred Foot Print. Whatever route they undertook to ascend the Peak their difficulties must have been unsurmountable. Marco Polo (1254-1324) who visited the Peak in the 14th century remarked that in places flights of steps were out in the rocks but none upwards and towards the summit.

Links of mighty chains that hung from the precipices were once the only way to climb like a swaying rope ladder. John Still who wrote the famous book Jungle Tide and one who took delight in associating with a race whose culture and history made this island prominently famous in the ages past, a country with a serene and happy environment, steeped in tradition and religious diversity.

He describes the fate of a Sinhalese family that climbed the peak then.

The writer climbed up the Peak once with another school friend in 1933, going all the way on push cycle to Ratnapura from Galle. At that time no pilgrim had travelled the road for several months of very wet weather. We were now climbing or crawling on the path laid on a knife edge, where on both sides were headlong precipices.

The wind blowing on the stretch was so fierce that the rain drops brought by the winds hit us on the face like bullets. We were just crawling on our bellies. It was an exercise where there was pleasure in suffering physical and mental pain.

Our history records that the Sinhalese Kings went on pilgrimage to the Peak. Kings who are accustomed to Regal Footwear toiled barefooted up its rough and stony way to the shrine of the Sacred Foot Print at the summit more than 7,300 feet above the level of the ocean that can be seen like a glittering cord far away along the horizon 50 miles away.

The first to climb was Vijaya I (1059-1114) A.D. followed by several subsequent kings. Panditha Parakramabahu II (1236-1271) went on pilgrimage in the 13th century to express his devotion to the Buddha by worshipping at the Peak. His devotion to religion excelled his love for poetry and literature. He donated lands to the Shrine and called his Chief Minister Deva Pathiraja and asked him to make the journey to the Peak for the devotees painless as the road leading to the summit was inaccessible due to swamps, wilderness and lofty mountains (Chulawamsa 9-2).

Towards the latter part of the 10th Century King Udaya of Anuradhapura (934-937) A.D. built a relic house on the Peak but the Cholians who invaded the country destroyed it. Vijayabahu I of Polonnaruwa made endowments to support the Holy Shrine. He granted lands on the way to the mountain, built resting houses and in unblemished humble piety offered his jewelled crown to Sri Pada.

This is recorded in the Panakaduwa copper plate. King Nissanka Malla inscription on the rock at the summit gives an account of him (1187-1196) in the 12th Century A.D. His name is recorded as one who had climbed the Holy Mountain as most other Sinhalese Kings had done in the past but he went with his army. In all the rock inscriptions he had made at Sri Pada as well as in other Buddhist temples like Rangiri Dambulla, he had exhausted the vocabulary of ecstasy in describing his performances.

King Parakramabahu II (1236-1271) who had his Capital at Dambadeniya visited the Peak in person during his reign. King Veera Vickrama set up the Dolos Mahe Pahana in 1542. The Buddhists had been the custodians of the Peak except for a short period when King Rajasinghe I (1581-1593) became an apostate and embracing the Hindu religion believing that it was possible to expiate his patricidal sin according to the assurance given to him by the Hindu priests. After the erosion of his piety and religion King Rajasinghe got down workmen from India and built the Berendi Kovil at Seetawaka. It was later destroyed by the Portuguese.

Thus Wimaladharmasuriya became a martyr for the cause of Buddhism. During the troublesome reign of King Rajasinghe Sri Pada suffered considerably. He handed over the shrine to the Saivite priests who had gained the favour of the King. Later a Samanera Monk from Medagammana roused the Sinhalese Buddhists of Sabaragamuwa against the Saivites and by stiff resistance of the people restored once again Sri Pada to the Buddhists, where ancient forms of religious fervour persist unbroken up to date.

King Rajasinghe had a sorrowful death by blood poisoning as a result of a bamboo splint piercing his foot at Seethawaka. King Wimaladharmasuriya I (Konappu Bandara) visited the Peak even though it was in the custody of the Saivites in the 17th century. He raised a Silver Umbrella over the Sacred Foot Print. King Wimaladharmasuriya II (1677-1707) started from Kandy escorted by a large following of troops and ministers to worship Sri Pada. King Veera Wickrama Narendra Singhe of Kandy (1707-1739) in the middle of the 18th Century provided 780 steps to reduce the arduousness of the climb.

Pilgrims climbing Sri Pada in the night in days gone by carried a light or pandama with an oil daubed wick in a bamboo stick. This could be seen like a wriggling illuminated large serpent climbing the mountain. Much has been written of the shadow of the Peak which as the sun rises seems to be projected in from the air without lying upon the forest below as one's eyes expect. This is a curious optical phenomenon. King Kirti Śrī Rajasinghe appointed Sanga Raja Śrī Saranankara as the incumbent of the Holy Mountain.

Sri Pada mountain was visited by several foreigners among whom was the Muslim traveller Ibn Batuta who in his writings records that he visited the Peak in 1344. Fa Hein, the Chinese traveller ascended the mountain in 412 A.D. The first European to ascend the mountain was Lieut. Malcolm in 1816. H.C.P. Bell the British Archaeological Commissioner of Ceylon climbed the Peak in 1907.

Importance was attended to the Sacred Bo Tree from the time it was planted in Anuradhapura in the 3rd Century B.C. and later the Tooth Relic became the next hallowed object of Buddhist worship. The three routes taken by the pilgrims who climb the Peak today are Ratnapura route, Kuruwita route and Hatton route. The approach from Hatton side is a cake-walk with steps constructed on the path right through to the top.