It's lovely at the top 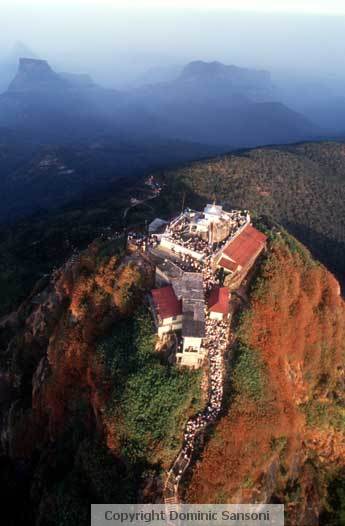 "The ordinary man looking at a mountain is like an illiterate person confronted with a Greek manuscript."

To me, these words by Alister Crowley, certainly do make sense now. Being a first-timer climbing Adam's Peak, just looking up at this majestic mountain while still at the foot of it, I admit I did feel quite helpless. It's amazing how small man can feel next to such magnificent creations of nature.

To those of you accustomed to more moderate mountains and climbs such as Sigiriya and Mihintale, take it from me, you need to be properly prepared for this challenge. Considering that Adam's Peak is indeed, the second tallest mountain in Sri Lanka, you really shouldn't be surprised at its magnitude.

Of the many routes to get to the location, the Hatton road is the most regularly used. We too chose this route and accompanied by two cousins and an aunt and uncle, I began to enjoy the scenery around me as we slowly entered the cooler climes of Sri Lanka. As we proceeded, views of the Wimalasurendra power station and the Castlereigh and Moussakelle reservoirs welcomed us. Looking at these picturesque waters, we couldn't help but marvel at the wonders of man.

According to our agenda, we were to stay at a small bungalow in Maskeliya. We were to rest for a couple of hours and then start our journey up Sri Pada around 10.30 p.m., keeping to the normal routine of beginning the climb in the night, in order to reach the peak at about 7.00 a.m. We would then be able to witness the much talked about sunrise, which was a 'must-see' for those climbing Adam's Peak; almost as important for some, as worshipping the sacred foot print was for others.

After making sure that we had all the necessary requirements, we finally left the bungalow and reached Nallathanni (the last town before our gruelling challenge), by about 11.30 p.m. But alas, it started drizzling and this literally 'dampened' our mood since we knew for sure that bad weather meant that the already tough climb was going to be much tougher. Believe me, when you are wearing almost four layers of clothing, a raincoat and headgear that makes you look like something out of a science fiction movie, having a heavy drizzle accompany you while you have to climb up a mountain for almost seven miles, isn't funny.

The climb up Adam's Peak has its very own vocabulary, traditions and beliefs. You must never state the fact that you might not be able to make it to the top. If such pessimism is voiced, you are told by the more experienced folk, that you will surely find yourself unable to move your legs, and can consider yourself punished by the numerous Gods said to be residing at the top of Adam's Peak. As for the unique vocabulary; first timers are referred to as kodu karayo and are given very specific advice regarding certain things. More or less a Buddhist tradition, all first timers are told to take a pure white piece of cloth to place on the sacred footprint, before worshipping it. I too was given strict instructions from back home, and dared not question them so the piece of white cloth was carried up with much reverence.

If you are climbing the Peak in a group, you are referred to as a nade and there are specific verses sung by the nades that are simultaneously crossing each other at a particular moment. While climbing up, you are sometimes greeted with cheerful smiles and encouraging words from people climbing down, and this gives you the much needed support to keep going. But there are also those mean ones climbing down, who are bent on making you feel like the most unfit individual on earth. They have an air around them that pronounces the fact that 'they've been there and done that' and you haven't and probably never will. They go to such great extents to make you feel that way, that they even reword age-old phrases to suit the group climbing up, in one instance referring to our group as 'battery bahapu nade!'

The steps are lined with little shops that are filled to the brim with all manner of imaginable things. They brighten the way and also give you that much needed bit of rest at regular intervals. With the width of the steps leading up to the Peak ranging from about 5 inches to almost one and half feet, you need all the rest you can get. Especially when you suddenly spot a faint light up in the sky and try as hard as you can to convince yourself that that is Not the Peak. The feeling of helplessness that I felt when I was told that the faint light I could see was indeed the Peak, was just indescribable.

Along the way, we came across several locations that are referred to by various names, most of them deriving from a folk story. Starting with Makara Thorana, we then came across Seetha Gangula, Gangule Thanna, Indikatu Pahana and Golu Thanna. The Peak is called Maluwa, while the surroundings are quite appropriately referred to as Ahas Gauwa (sky line), since this area is almost in the sky.

At Indikatu Pahana, there is yet another requirement to be filled in by first-timers. I too purchased the packet that had the needful to perform the ritual. You are expected to entangle a needle and one end of a thread on an already existing mass of thread that resembles a gigantic cobweb, and then drag the other end up a few steps and hang it on a particular iron pole. The sad part was that almost all the visitors just dropped the empty polythene packet that contained the items onto the ground, creating a huge garbage dump.

With the drizzle constant, and since our pace was extremely slow, our nade's hopes of witnessing the sunrise were slowly diminishing. Our worst fears were confirmed by the people climbing down who told us that though they got to the Peak on time, they had not witnessed that exceptional sight due to the bad weather.

When we finally reached the only part of the climb that had railings, we were sure that this final lap would be a breeze. We were mistaken. Though hard to believe, holding on to a railing while climbing, was much tougher than climbing without support. What kept me going was the faint sound of a loudspeaker, that made me feel that we were now finally close to humans whose feet were touching a horizontal ground area, and who were not climbing up or down a mountain.

By now, having climbed 7360 feet for almost nine hours, we were hungry, tired, cold yet hot and perspiring, and all we wanted to do was to sit down somewhere. Placing my foot on the final landing of Adam's Peak and looking back over my shoulder, I admit I did feel quite gratified about the feat that I had just accomplished. But of course I was promptly reminded that I was here for a religious purpose and so, very reluctantly took my socks and shoes off and almost froze then and there in the 3-degree temperature. Basically not feeling my feet as I stepped on the icy cold cement floor, I tried to ignore the freezing air. Obediently, my cousins and I, all first-timers, laid out the white cloth on the sacred footprint of Lord Buddha (according to our faith) and worshipped it. Once all the formalities were done, we realised that the sun was shining brightly, and the atmosphere was now very pleasant and comfortable .

Luckily for us we had absolutely no reason to hurry back down, so we spent almost two relaxed hours on the Peak, taking in the beauty of Sri Lanka. I felt as though I was touching the sky as clouds passed by below us, and marvelled at the many miles that had brought me to this magnificent and sacred mountain. This was a moment when I truly felt thankful I was alive.

Climbing down was not as bad as I expected it to be, and though we took almost nine hours to do it, it was quite enjoyable, as now roles had been swapped and we were the ones who had 'been there and done that'. We chose random people and smiled encouragingly at some, while being mean to others for no valid reason. Believe me, climbing thousands and thousands of steps in the middle of the night, makes you do strange things!

All in all, climbing Adam's Peak was an extremely fulfilling experience. It is one of those feats that you just cannot comprehend until you have really done it. It might have left me feeling that my legs didn't belong to me anymore, made me run away from the sight of a stairway for the next two weeks and left me immobile for a number of days, but if I had the chance to do it again, I would. Especially to see an incredible ball of fire leaping out of the horizon and making that phenomenal entrance to announce that yet another new day has dawned.